Post by Lyssia Coffey, PSU postbacc and Lab Tech for the Climate Change and Archaeology Project

In sorting through the matrix from Dr. Anderson’s work in Alaska, I, and some other students, have found many of these amber-like pieces. They are hard and amorphous with some sharp edges. They are an orange-amber color and slightly translucent. They do not appear to be worked in any way.  At first we labeled them as ivory because their color and texture is similar to some ivory chips in the matrix, but upon closer inspection they do not seem to be ivory. Microscopic examination has yet to prove either way but does seem to suggest that they may be amber. If it is amber, was it brought to the site by people or by natural processes? An amber bead was also found amidst the matrix but we do not know if there is any correlation between these finds.

Recently I found a sliver of bone that appears to have been modified (see below). It has a hole at one end and the appearance of an animal. I am unconvinced though, that the animal form is intentional, and not just a trick of the eye and the mind. Dr. Anderson said she will examine it for cutting and polishing marks, which would indicate that it has been carved into this shape, rather than break marks, which could be accidental. 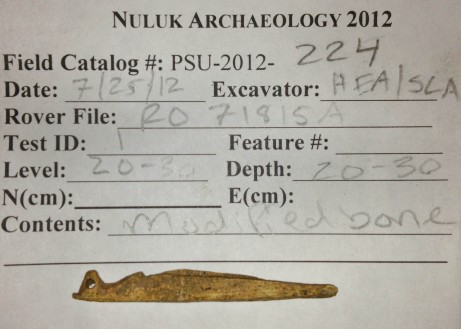