Continuing our repository visits for the PNW Clay and Pottery Project, Shelby and I recently visited the Burke Museum in Seattle to look at their collections of clay artifacts from Western Washington.  The collection was very different from what we saw in the University of Oregon repository earlier in the spring — the pottery and fired clay pipes we saw from Southwestern Oregon are largely lacking as we move further north.  We did see something intriguing, though: the Lower Columbia River clay figurines.

We have been seeing modeled clay figurines since we started the project, though often what’s been recovered archaeologically is incredibly fragmented.  Figurines with modeled limbs and heads are often so vulnerable to breakage that they’re recovered as piles of badly fractured parts: cylinders that could be limbs, or torsos with only a hint of what might have been attached.  The Lower Columbia figurines, on the other hand, are constructed much more simply and have often been recovered intact.  Many of the figurines are single flattened pieces of clay, with their features drawn into the wet clay with a pointed stick or formed in very shallow relief on the top surface.  Simple dots and lines represent faces and body ornament alike, though some figurines have appliqued noses or impressed eye sockets to augment these basic features.  Many of them are topped with a design of parallel diagonal lines that has been interpreted as representing stylized hair, a basketry hat, or perhaps a pine tree or a fish skeleton. 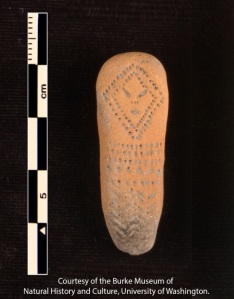 Along with these tabular figurines, the Burke has a few finely-shaped, three-dimensional clay artifacts from the same area.  They’ have been variously described as effigy pipes or club heads, and they display detailed human and/or animal faces – rendered in a much more elaborate, lifelike way than the “smiley-face” designs on the tabular figurines.  I happened to sit facing this owl-faced bowl while we were at the museum, and found its deeply-recessed eyes arresting and a little bit creepy. 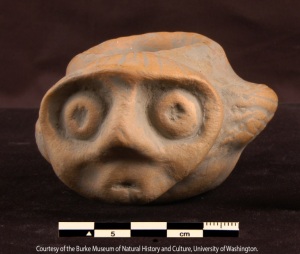 Both of these artifact types stand out from what we have seen elsewhere in Oregon and Washington.  But as we delve deeper into Northwest material culture in the course of this project, they look less like anomalies and more like translations of existing artifact forms into a new medium.  In my next post, I’ll feature some stone artifacts from across the Northwest Coast that show an intriguing resemblance to these clay items.